Judgement had been awarded against Pye Radio for infringement of Marie’s patent covering her truncated record stylus. Now the question was, would Pye appeal to the Appeal Court? Marie and the family were kept in suspense.

An injunction had been granted by the court to prevent Pye Radio from manufacturing any more of Marie’s stylus. Marie was eager to restart manufacture of her invention. To this end, she approached the bank for a loan in lieu of her damages claim. However, with the possibility of the judgement being overturned by the Higher Court, the bank was not supportive of this aim.

Here is an excerpt from Chapter 35 of A Sound Revolution.

The Show Must Go On

Weeks of waiting for news of Pye’s intentions finally came to an end. A letter dated 17th of January 1958, gave notification from Pye’s solicitor’s that they had been instructed to lodge a Notice of Appeal in the Appeal Courts. Not unexpected but still a blow, for it meant that the validity of Mother’s patent and the question of Pye’s infringement were still in question. She saw no reason to let it interrupt her plans to restart the business; she was confident that the Appeal Court would uphold the Judgement of Justice Lloyd-Jacob, and she applied without delay for a Legal Aid certificate to cover the cost of her legal fees.

Pye’s Appeal, however, did have an effect on her negotiations with the banking world. Anxious at first to be helpful, the bank was now very wary of advancing her a loan to start manufacture of Sapphox while the Appeal was pending. Determined not to leave any stone unturned, she wrote to Lord Attlee, a member of the former Labour government, who had helped her before, asking him if there was anyway he could use his influence to move the banks to agree to a loan.

What irony! Mother was the owner of a valuable patent – yet had no money to finance its manufacture! An American company had expressed an interest but, on hearing of Pye’s Appeal, withdrew from their negotiations to buy an interest in Sapphox. A patent under litigation is a patent in doubt. Even more bizarre, despite her victory in December, Mother was without funds to pay the annual fee that would keep the patent in force. On the 24th of January, she wrote to the Patent Office, asking for an extension of three months in which to pay the fees.

Undaunted by the Bank’s refusal to support her financially because of the appeal, she pushed ahead in her efforts to raise Killick and Company from the ashes. Mr Parnell, Vic Selwyn and Mr Thomas were still interested in investing money in the venture, and with the use of her friend’s office in the Old Steine, Mother kept up her search for money and accommodation to start up manufacture.

Mother was very concerned about Nigel, who had just celebrated his seventh birthday. A visit to his school showed her there was a problem with his reading. With over thirty-five children in the class, it was impossible for his teacher to give him the individual attention he so badly needed. The more he fell behind, the more he hated school and would plead with Mother to allow him to stay at home. Dawn and I could only sympathize with him; we knew only too well how he was feeling.

It was clear that the large and poorly equipped state school could do nothing to help Nigel. The children were noisy and streetwise, able to look after themselves and quick to pick on someone who did not seem to fit in. Nigel, quiet, sensitive and not very confident, felt like a fish out of water. Determined that, now she had won the first round with the combines, her small son should suffer no further damage to his education, she looked round for a small private school for him to attend. St. Christopher’s, in Hove seemed to fit the bill nicely. The headmaster was shocked at the state of Nigel’s lack of progress and he assured her that he was a bright boy who had simply been overwhelmed in the large class. At St Christopher’s, he assured her, he would receive the individual attention he needed and that he would soon be up to the standard for his age.

Her victory had been widely reported in the national press and she found people only too willing to give her credit when they realised that she was ‘the Mrs Killick’ who had won the recent case against Pye. Satisfied that she had done the right thing, she opened an account at the school’s outfitters.

Determined not to allow the lack of money, or Pye’s appeal to spoil her victory, she decided to celebrate her forty-fourth birthday with a few friends. Ashamed of the shabbiness of the flat, she asked her friend Alicia if she could give a small dinner party in her large and comfortable apartment. Alicia, a dear lady in her sixties, readily agreed and they set to work planning a menu.

The night of the party arrived and Dawn and I dressed for the occasion. Dawn, who always enjoyed dressing up, wore her latest acquisition (proudly bought with the wages she earned as a waitress in a small sea-front hotel). Her short, curly auburn hair, contrasted with my long fair tresses, as did her bubbly personality with my reserve.

We arrived at the apartment as a large basket of flowers was delivered to Mother. Despite years of struggle and ill health, she looked radiant, happy to be celebrating her birthday with her family and friends.

“Tonight,” she told us, “I will toast to the future success of my new business and victory in the Appeal Court.” 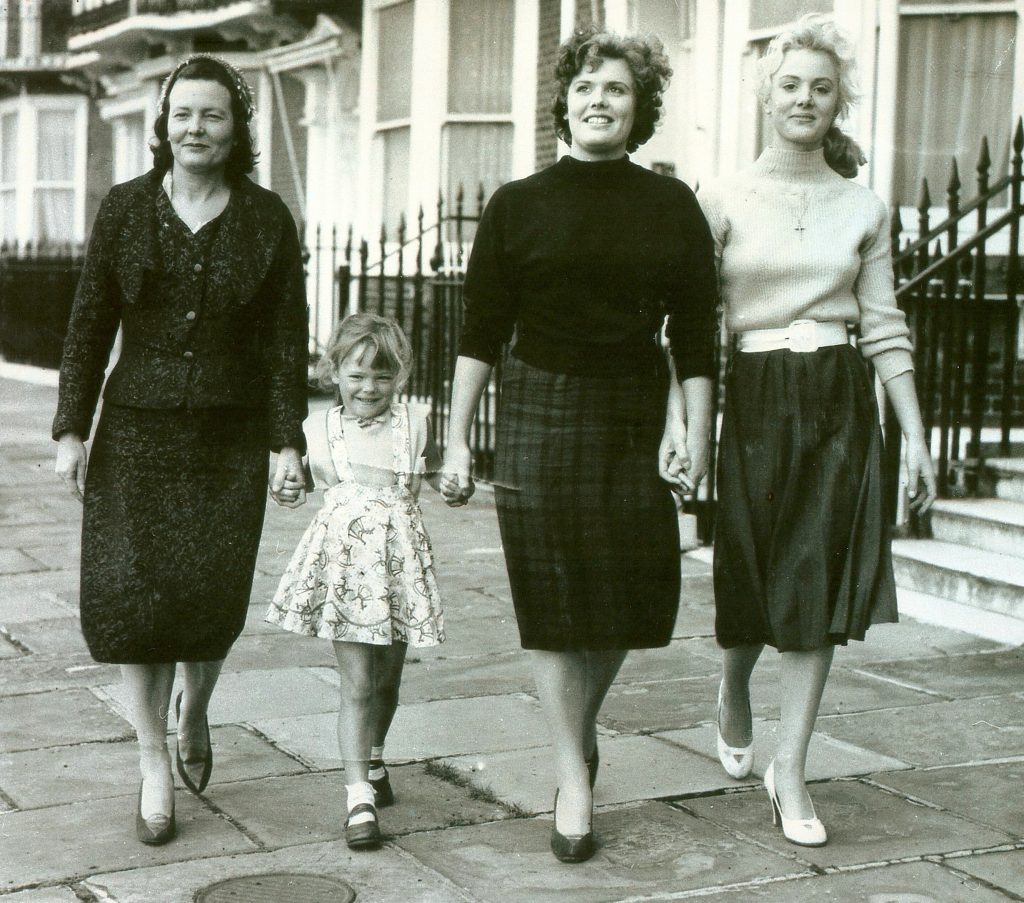 The large oval dining table laid with Alicia’s best linen and silver reminded Mother of the days when she too had owned such lovely things. Her guest list consisted of her accountant, Mr Knight, and his wife, and one or two other business associates. Alicia and her son Bernhardi, who had allowed Mother the use of his office, would also be there with his niece Karen. Over dinner Mother entertained her guests with some of the more humorous situations of her grim battle with Pye. Mother, not wanting there to be thirteen at the table, had invited a young man (a friend of Karen’s) to make up the number to fourteen. To my embarrassment, I found that whenever I looked up, he seemed to be looking in my direction. After dinner he asked me to dance. Feeling too awkward to refuse, I felt myself blush as he took me in his arms; conscious of his admiration I prayed for the music to end. Mother was happy to dance; the last time she had danced the night away, she had been wrapped in Father’s arms and he was very much in her thoughts that night.