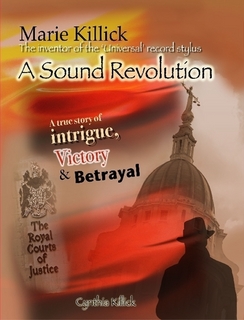 I am not a writer but I have done my best to put the story together. By its very nature there is a lot of legal input but I have tried on the final edit to cut this to a minimum. I hope that something of the flavour of her battle and indomitable spirit comes through; as well as some of the humour that we experienced. It was often not amusing at the time, but in retrospect the funny side shone through and we would often enjoy the re-telling of those episodes in an otherwise traumatic life.

Her ten-year legal battle and her victory over Pye Radio made legal history. The case is still cited today in instructing law students in patent infringement law. Pye Radio made a donkey of the English legal system when she was forced into a rigged bankruptcy after Pye bought one of her debts and manipulated the Official Receiver in Bankruptcy to dance to their tune. He settled her damages claim against them – which would have run into millions – for a derisory settlement of a few thousand pounds. She died from cancer, broken-hearted, a bankrupt, homeless, in poverty and separated from her children, who meant the whole world to her.

I have selected here a few extracts from the book.

From Chapter 11: The Good Samaritan

From Chapter 33: Infringement or Not?

From Chapter 35: The Show Must Go On

From Chapter 39: The Final Judgement