It had been a long journey for Marie in her battle with Pye Ltd, involving many years of burning the midnight oil; immersing herself in Patent Law; gathering the evidence of Pye’s infringement of her Patent covering the truncated sound reproducing stylus. A journey that had brought in its wake a lot of stress and upheaval for her and the family. Finances were so tight in the Killick household that her solicitor had to wire her money for the fare to London! Legal victory on Monday 21st December would, she hoped, bring an end to the poverty that she and the children had endured for ten years. Soon she hoped to restart her manufacturing business and move to have her other patents and patent applications around the world restored, to protect her invention.

Now finally she had reached her destination – the High Courts of Justice in the Strand, London. She was accompanied by her two eldest daughters, Dawn and Cynthia. As she strode through the cavernous building, she felt the excitement of the moment take hold of her. She searched the lists of court cases displayed in a glass cabinet in the great hall. There it was: Killick V Pye Ltd, to be heard in Chancery Division Court 2. The eminent patent judge, Justice Lloyd-Jacob would hold the outcome of her hard work and sacrifice in his hands. She felt confident that British Justice would not let her down.

Here is a short extract from A Sound Revolution: Chapter 33 Infringement or Not?

“On 20th of December, we were once more travelling by train to Victoria Station. With less than twenty-four hours notice, we were on our way to receive Justice Lloyd-Jacob’s judgement. Absorbed in a stack of technical papers, Mother sat quietly reading a point of evidence. She was still concerned that the absence of her former solicitor, Mr Kenneth Brown, in court would be a point in Pye’s favour.”

Later in the chapter:

“Mother’s attention returned to the Judge who was covering a point of evidence of the opposition’s expert witness, Mr Myer.

“In my judgement the defendants, by manufacturing in accordance with their admitted drawing and to the dimensions and tolerances therein contained have infringed the plaintiff’s monopoly and I must accordingly grant to the plaintiff the relief which is appropriate thereto.”

“Our feet hardly seemed to touch the ground as we gathered our things together and made our way to the corridor outside. Everything seemed so unreal – words had been spoken and everything had changed. Mother shook Mr Shelly’s hand, thanking him for all he had done on her behalf. He in turn congratulated her on her victory.”

Pye were not ready to give up the fight. When Marie was awarded judgement in her favour in the Chancery Court, in the Royal Courts of Justice in London, they lodged an appeal to the Appeal Court. The three appeal judges, Master of the Rolls (Lord Evershed), Lord Justice Romer and Lord Justice Ormerod reviewed the evidence and to our joy upheld the judgement of Justice Lloyd-Jacob that Pye Radio had indeed infringed her Letters Patent covering her invention of a truncated record stylus.

Marie had the final legal victory; there were no grounds on which Pye Radio could appeal to the House of Lords. We were jubilant – now at last Marie could, after the assessment of the damages Pye owed her, restart her business and enjoy the fruits of her invention in a growing musical industry. The anxious months of waiting for the decision of Court of Appeal was over.

Marie Killick receives a telegram to inform her of the Appeal Court’s hearing to give judgement on Pye’s appeal: 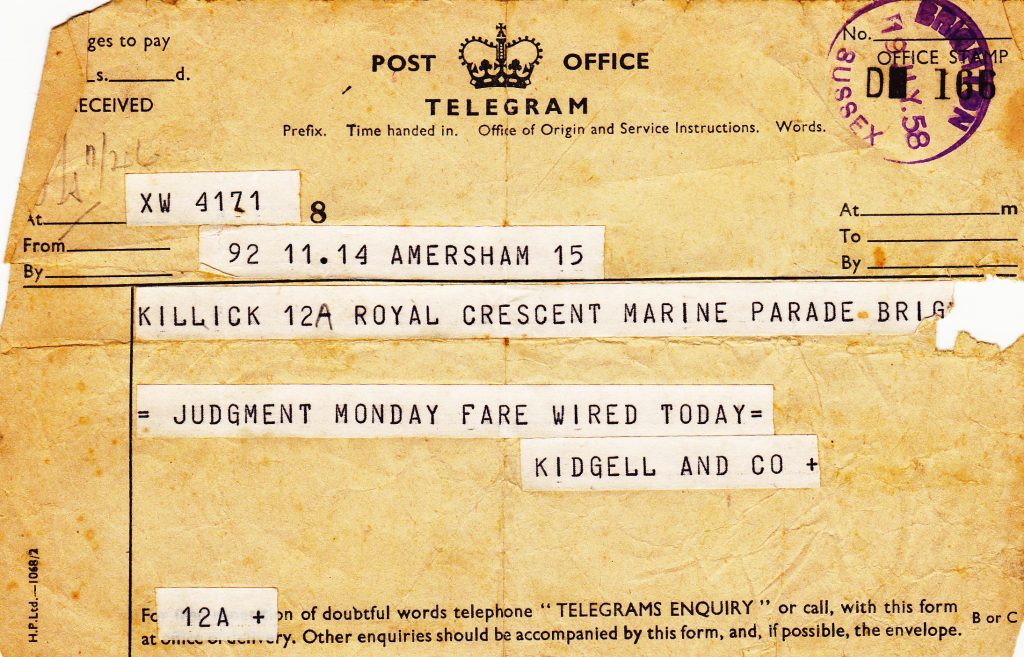 Her damages, when awarded, would enable her to pursue other companies who had been manufacturing her stylus since the restoration of her British Patent in September 1951. Marie was thrilled to be able to be captain of her ship once more. The family would, when damages were settled, have a home of their own again; something they had been denied since having to sell her house in Esher to finance the legal cost of the case, before having to apply for Legal Aid once all her assets had been sold.

News of Marie Killick’s victory breaks around the world

“A 40-year-old widow inventor walked out the Law Courts in London yesterday feeling £5 million better off. It was the end of the Case of the Sapphire Needle – and she had won.

Mrs Maria Louise Killick smiled at her two elder daughters. ‘This is the happiest day we’ve known for ten years,’ she said. ‘All my jewellery was gone – we were down to poverty level.’
‘But this should mean £5 million to me.’ Two appeal judges had ruled, at the end of a 20-day, £20,000 law suit, that Mrs Killick was the inventor of a sapphire stylus for long-playing gramophone records.
The judges decided, too, that Pye Ltd., the radio firm, had infringed Mrs. Killick’s patent for the stylus.

They dismissed an appeal by Pye against a decision of Mr Justice Lloyd-Jacob, who had found Mrs Killick’s patent infringed and ordered an inquiry into the matter of damages.
Said Mrs Killick, who started her own engineering business 20 years ago: ‘I had the manufacture of the stylus stopped by an injection. Now I shall start making it myself.
This decision means I am the only person who has this stylus. Manufacturers all over the world have awaited this decision.
Every shopkeeper who has been selling it has infringed my patent.’
Mrs Killick, who lives at Royal Crescent, Brighton, invented her revolutionary needle during the war when she was making recording cutters for the Forces.
In 1945 she took out Patent No. 603606. It lapsed in 1949 for non-payment of fees, but was restored in 1951.

“In 1946 I was given a £58,000 contract, but it was broken after I produced £10,000 worth because some of the big combines began making the same type of needle.
“In 1948 a company offered me £75,000 for my patent. I refused to sell.
The Board of Trade had told me that more than three million sapphire stylus have already been sold. I shall claim royalties on all of them.
I have 25 writs ready to serve on companies in Britain.
In America I understand, 78 million dollars worth of sapphire styluses have been sold. I intend to sue all companies there which have infringed my patent.

Lord Justice Ormerod said yesterday that the needle gave high-quality reproduction for a considerable time.
The needle was flattened and bevelled at the end, so that it rode on the sides of the record groove.
Pye claimed that Mrs Killick’s patent was too wide to be enforced. “In our judgement there is no reason why she should not frame her claim in the broad way she has.” said the judge.
Pye also claimed that their needle was a “flattened sphere” but it still had a bevel on it.
Spokesmen for sapphire stylus makers said last night that a stylus coast about 10d to make and sold in the shops for 6s.”

‘Riches to rags to riches’, by Marie Killick

This is a draft copy (unfinished) of Marie’s account of her battle to get Justice!

The music industry was shaken by the judgement against Pye Radio for infringement. Her patent case had made legal history. 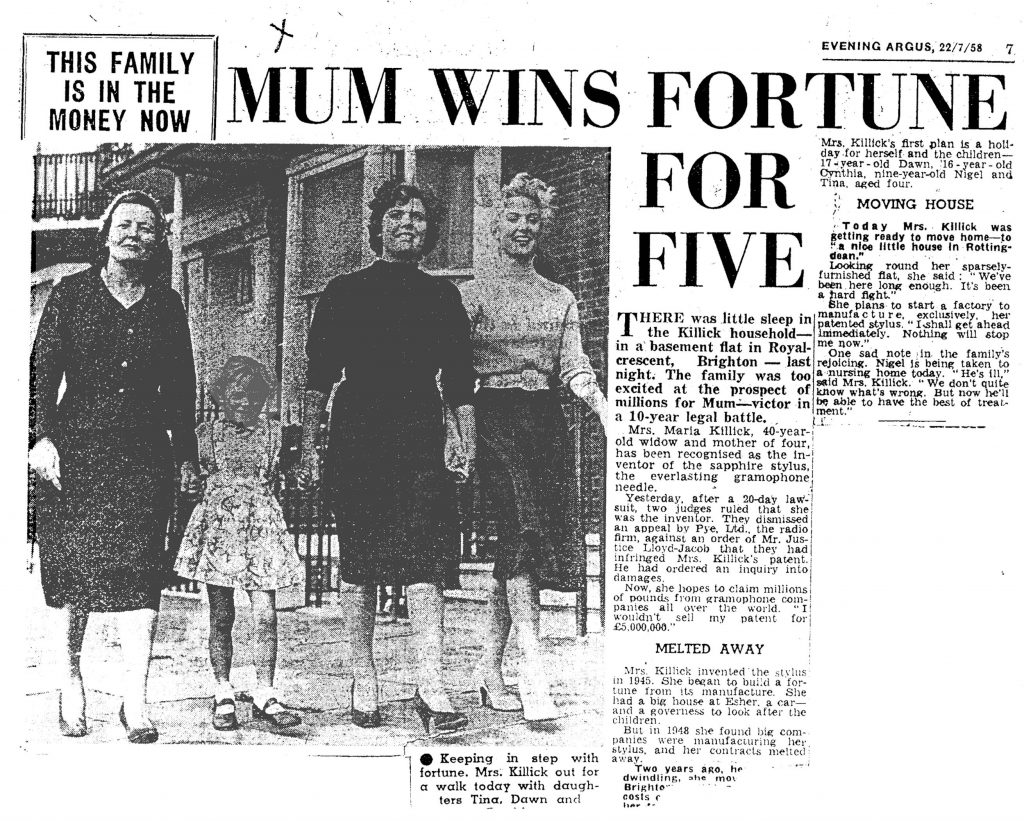 Letters of congratulations poured in. Some address only to Madam Sapphire, The Patent Office, London and still they found their way to Marie, who was staying at the Piccadilly Hotel in London at the time. 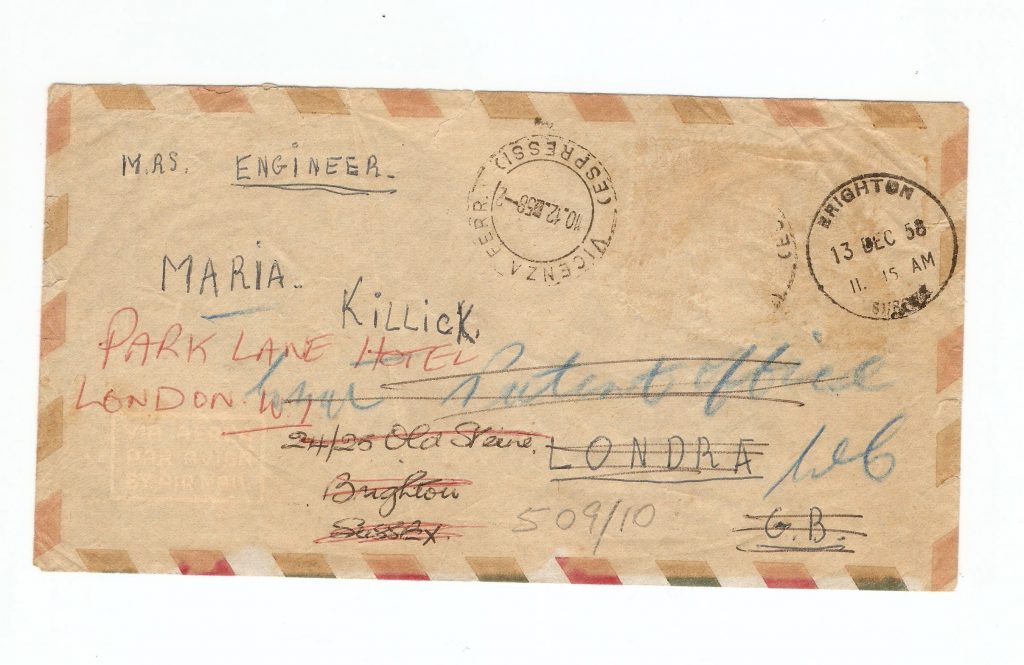 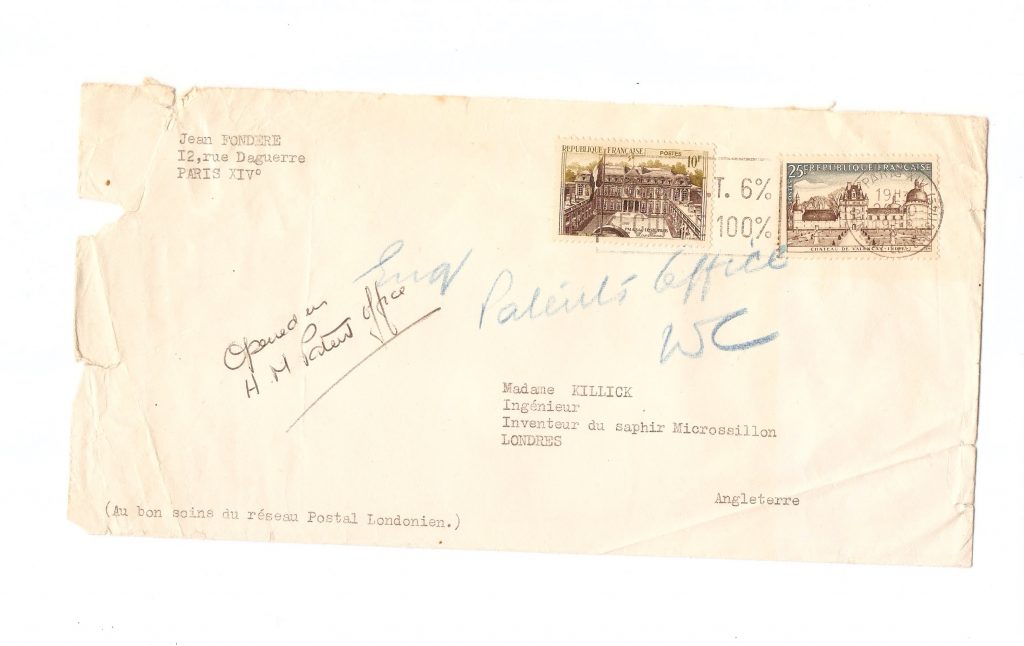 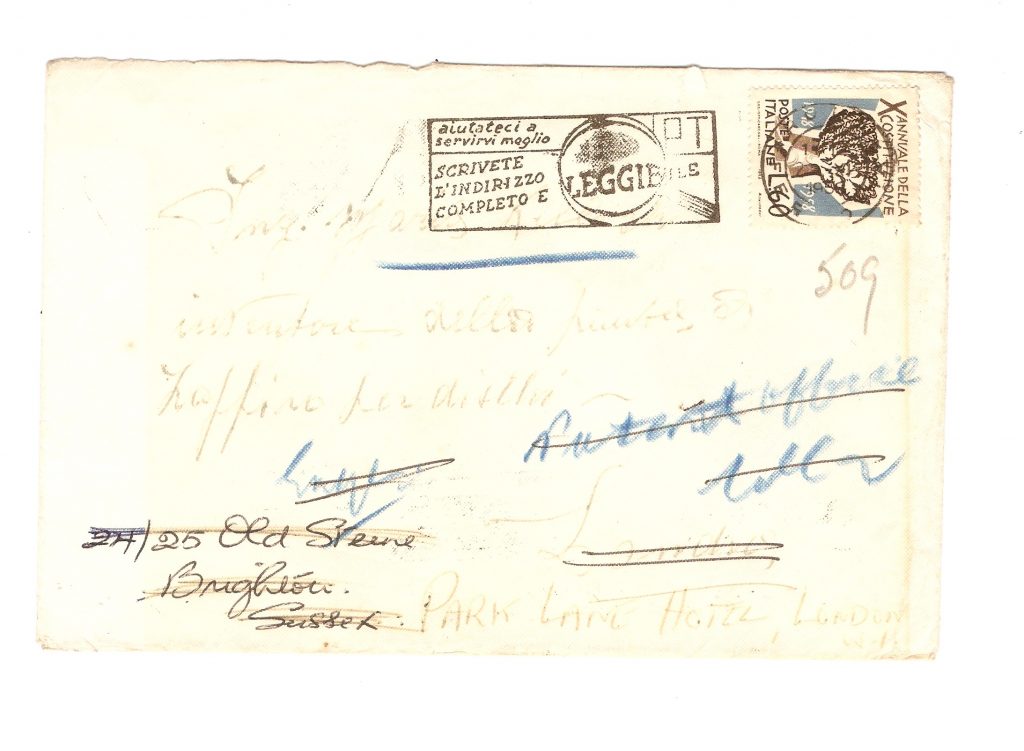 The ink on the envelopes have faded with time but the memories of their arrival in the Killick household has not; there were sackfuls. There were also, of course, begging letters and even one or two proposals of marriage!

The culmination of her legal victory was a very busy time for Marie as, with her accountants and solicitor, she set about to get down to the business of accessing her damages from Pye Ltd.